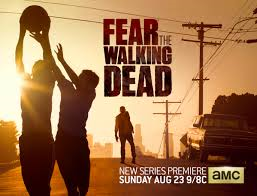 Spin-off of The Walking Dead, where a group of survivors living in Los Angeles endure the apocalypse and watch as the world changes. Starring Kim Dickens, Frank Dillane, Alycia Debnam-Carey, Mercedes Mason

This isn’t The Walking Dead.  This show was promoted as one which would answer questions about the apocalypse, such as:  How did it start?  Where did it start? Who is Patient zero? So far, this show has not answered any of these questions, although they have hinted that everyone has the virus; it is just a matter of time before it is activated in each person.  This creates some plot holes, but it is still suspenseful enough to keep you wondering what will happen to the survivors. I’m already trying to figure out who is going to survive and grow with the changing world and who is going to die.

Lori comes to mind as I watch; I keep trying to place where she would be in the story at this time.  Then, I wonder, will they have a crossover episode?  The producers say it is unlikely, since they film on opposite sides of the country.  Will they then kill off this season’s characters and begin afresh next season?

I didn’t expect this to be worth more than a quick preview, but already I am hooked, worrying about how long the characters will last. This one is worth a watch.