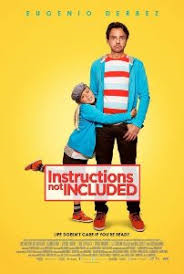 When a bachelor finds a baby on his doorstep, he takes on the challenge of raising her until six years later when the birth mother comes knocking. Starring  Andrés Vázquez, Hugo Stiglitz, and Eugenio Derbez.

This is one of those films that takes you for a loop. I was more than pleasantly surprised by this one. The film takes you through many emotions. At first, I thought this was going to be filled with adult humor that most comedies have now, but the movie shifts from the character’s earlier life to his new life. Slowly, the film transforms as the bachelor becomes a dad. Then, the twist at the end just wrings your heart. I was surprised this film wasn’t up for more awards than it was. The acting by Derbez was brilliant, and the young Loreto Peralta as the daughter was just as talented. Derbez acted but also directed and wrote this beautiful story. This is one I highly recommend watching. It’s worth the watch.