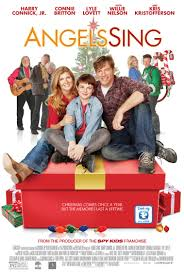 A father must regain the joy of the holiday season when his son faces the same tragedy he faced at the same age. Rekindling his Christmas cheer, the father encourages his son to embrace the joy of the season. Starring Harry Connick Jr., Connie Britton, and Chandler Canterbury.

This movie is hard to love; it has its moments, but I was disappointed in the film overall. There’s a lot of music, which I love, and it’s not surprising since the cast is mostly a musical cast. The film struggles with character development. It tries to give us the background of these characters, but alas, we still don’t learn why they are the way they are. What makes it worse is that the film has no plot. We wander around, unsure of why the characters are behaving the way they behave, and we lack direction on where these characters are going. The actors were all pleasant, and the singing was enjoyable, but with no climax to the story and little to no story to speak of, this film is not worth a watch.