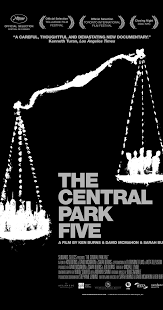 This documentary examines the rape of a woman in Central Park in 1989 for which five black and Latino boys were convicted. Years later, a serial rapist confessed to the crime. Starring Antron McCray, Kevin Richardson, Yusef Salaam, Raymond Santana, Kharey Wise, Matias Reyes.

This is a brilliant documentary, revealing how the pressure police face to get a conviction for a crime can change the course of innocent people’s lives. It covers crime in New York in the late 80’s, what the boys were up to during that time, the time line of the crime, and the DNA evidence. It also shares what happened to the boys after they were convicted. You cannot turn back the hands of time. I can only imagine how hard it would be to forgive such a grievous mistake. This film definitely sides more with the victims (the boys who were wrongfully convicted), which is understandable, given how messed up the case became. This documentary is worth a watch.