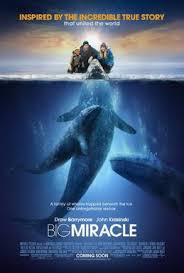 A reporter and his girlfriend try to save a trio of whales stuck in the ice of Alaska. Starring John Pingayak, Ahmaogak Sweeney, John Chase, John Krasinski, Drew Barrymore, and Ted Danson.

I remember following the TV reports about these whales. The story on the whole is boring, and I am not one to love seeing animals on film in trouble, even when it’s fake. It’s also very political. It would have been so much better if they left the politics out of it and just told the story of how they would save these whales. Although, by the end, I wondered if it was worth it. The film lacks the heart it should have had; it should have made us want to save the animals. On top of it, the characters were all annoying, I just wanted them to save the whales and move on. To me, it was a pointless film and not worth a watch.