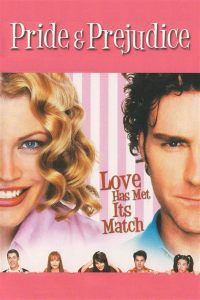 Jane Austen’s classic novel is modernized and set in Utah. Elizabeth Bennet is a college student working hard at writing her first novel, until she meets Will Darcy. Based on the book by Jane Austen. Starring Kam Heskin, Orlando Seale, and Benjamin Gourley.

There is so much wrong with this film. It tells the story of Elizabeth Bennet and Austen’s Fitzwilliam Darcy, but it has a really bad production and script. The script is just horrid. The characters have no depth to them, unlike those in Austen’s novel. The men are not very clever; even Mr. Darcy, at times, seems to have an air of ridiculousness to him. The script just doesn’t merge the modern time with Austen’s book smoothly. Plus, there are many inconsistencies in the story. Then, add to that the bad costumes – it looks like the wardrobe is from the 90s, but there are times when the men seem to wear the same style of clothing as the women. There is also the problem that Darcy is from England and, somehow, his sister has an Australian accent! I have no idea where that comes from. Even though this version of Pride and Prejudice is the worst I have seen, the actors aren’t bad. The film was produced through a company for the Latter-day Saints, and they often mention church, going to church, and holding close to your virtues – although, the mention of the church was out of place at times. This film could’ve been so much better, but alas, it’s not worth a watch.