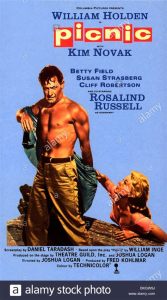 Holden is the drifter who floats into town and tries to make amends for the mistakes in his young life. However, he’s not young; in fact, Holden is older than the character he portrays. Usually that is a problem, but while he looks older than he should, the emotions portrayed throughout the film are brilliant. This film brings us American small town life. It also brings to life women’s culture in the 1950s. The film, at times, struggles with the staging of the scenes, but overall, it was brilliantly acted. This is a film worth a watch.