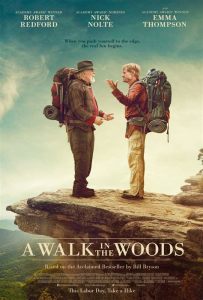 After twenty years living in England, Bill Bryson comes home and decides to hike the Appalachian Trail with his best friend, Stephen Katz. Based on the book by Bill Bryson. Starring Robert Redford, Nick Nolte, and Emma Thompson.

A Walk in the Woods isn’t a bad film, it just missed the mark. The humor of Bill Bryson is lost in Robert Redford’s and Nick Nolte’s performances. The casting is a little off; when Bill Bryson hiked the trail, he was in his forty’s and Redford is, obviously, older. So, instead of watching two middle-aged men walk the trail, we worry about whether or not Redford and Nolte would survive the walk. The film just panders along with little to break up the mundane walk. It’s a film that’s not worth a watch.