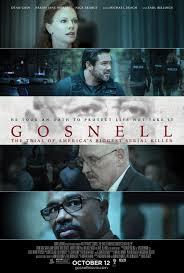 This film isn’t about abortion. Gosnell was a doctor who committed the most heinous crimes by the number of murders in his office.  The trial is unprecedented as it goes into detail of how abortionists work and the difference in how Gosnell killed the children in his office. Even the talk of how doctors perform abortions, to me, is inhumane. It’s a life – by the time a mother discovers she is pregnant, the heart of the child is already beating. They have discovered that the child does feel the pain of the shot that is given to them before they are aborted. The whole scenario is inhumane. I wish this film were better made – it obviously doesn’t have the best production value. The actors were wonderful in their roles. I especially enjoyed Earl Billings performance as Gosnell. It has to be the hardest role to play as a man who knows he is doing wrong but also has little remorse behind his actions. He seemed to believe that he was untouchable with his crimes because he was an abortionist, and nobody would want to touch him. Luckily, we have people who know the laws enough, like the prosecutors against Gosnell, to show his crimes to the world. This film is worth a watch.